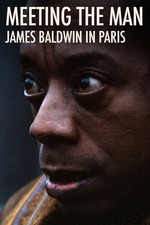 Originally posted on my blog.

This rediscovery by streaming provider MUBI is one of the most interesting films you can watch. On the surface, this is because of the fantastic political insights given by Baldwin, the subject of this short documentary.

After all, this is a film of him speaking about his life as a writer in Paris, that is fascinating enough. Of course, it being Baldwin – one of the most important voices of recent history (recently immortalised in Peck’s superb I am Not Your Negro) – the insights provided are brilliant and the focus moves far beyond the initial scope. This second part, though, is where the genius lies (though genius is a strange term as it applies to the film rather than the filmmakers), as the film becomes an amazing exposé of the myth of the auteur, and pushes the boundaries of conventional criticism.

This film is one of the most important pieces of cinema you can watch. It is also a badly made documentary, if viewed entirely from the filmmaker’s standpoint. The documentarian aims to make a shallow, and really rather problematic, documentary. He is also bad at asking questions in addition to having a deeply flawed concept. His aim is to provide a picture of Baldwin the writer, and the Parisian.

It is an exoticised picture, an idyllic liberal dream that he wishes to present: the artist surrounded by the existential Parisian backdrop where he smokes cigarettes in pavement cafes and produces bon mottes about writing and literature. The core idea here, and it is stated directly, is that there has been too much focus on Baldwin the activist and political figure; on Baldwin the firebrand who campaigns for racial justice. But where is the portrait of a novelist that lives in Paris and just writes books?

This represents such an outdated way of looking at art and literature and is instantly skewered by Baldwin. And this is how a bad documentary becomes a masterpiece. Because you cannot comfortably separate Baldwin from his politics and you cannot divorce him from an identity and a struggle that underpins his existence. So Baldwin hijacks the film. He refuses to engage with surface level questions and starts to interrogate the documentarian. He will not cooperate and he forces location changes and makes them speak to other people. It is glorious. We see how a filmmaker is trying to push a vision and how it is so antithetical to the subject he is trying to document.

The film then becomes combative, necessarily so. Baldwin takes complete control and the film becomes his. And he uses it well. He gives a phenomenal speech that just destroys the position of the interviewer, revealing it for what it is and pushing the necessity of Baldwin’s political stances. The documentary wants to be a puff piece, to reduce Baldwin to a palatable figure for a white audience: to propagate their view of a writer and what a writer should be. In doing so, they show a real ignorance of the political situation.

These filmmakers genuinely believe that they do not need to hear from Baldwin, as a political voice, because they have read his books; they think that because they read his books they are not part of the problem (the problem being racism). Baldwin, brilliantly, turns their documentary against them to make it clear that they are part of the problem, that systemic racism includes them. And thusly, this becomes a powerful unpicking of a pernicious trend in liberalism: a kind of vague tolerance that believes tolerance is enough; that believes not being actively racist is enough. Baldwin, effortlessly, shows this as a sham as he never gives into the wants of the documentary and forges his own narrative.

This is why this film is superb. It shows that films exist outside of their creators and cannot be defined by them, it also shows that films can be wonderfully subverted. The closest parallel, strangely, is probably Symbiopsychotaxiplasm: Take 1 – though this short is an even more direct comment on authorship in film. Fundamentally, Black individuals needs to be able to tell their own stories. In this film, Baldwin seizes the means of filmic production and broadcasts his voice with legitimacy. When we give platforms to people, we are also giving resources and possibilities to people, and this shows the need to give them to the right people. Baldwin manages to get his voice heard and makes his point so brilliantly. However, this film is overshadowed by a sense of burden. Baldwin is forced into having to combat, into having to fight because of white people who want to centre themselves in the story and reshape the stories around them.

The film aimed to do this, to sanitise and to peddle the apolitical – which is, paradoxically, staunchly political. But the film never became this, it became something astonishing. And to watch this short documentary is to watch the possibility of film as an art form beyond the whims of a director and producer. We see how intention is not a relevant metric to judge by and how art can speak so powerfully in spite of itself. It also exists outside of conventional film criticism, as this film is only good because the film is also bad. It corrects itself, but by using a pernicious premise as a starting point, and by dismantling it, it becomes a piece of protest art as opposed to a conventional film.

This failed documentary, clearly suppressed out of embarrassment, becomes a vital argument for the need to be anti-racist and is also a filmic revelation. To watch this is to realise that film can subvert even the most seasoned filmgoer’s expectations, that art will resist dictatorial control and that auteur theory is bunk. It is a hell of a lot to achieve in under thirty minutes, but that’s James Baldwin for you.