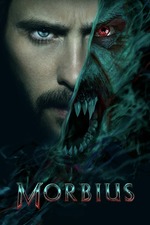 At this stage, Morbius has become more meme than film and, frankly is not even deserving of that status. One of the worst cinematic crimes (above being actively immoral) is to be bad and boring. This work has the quality level of Catwoman without the entertainment value of pure nonsense cinema.

There is a cold capability to everything here. Though the narrative is uniformly poor, everything fits together like a film. It fits the dry expectations of the definition of cinema, a movie that could have been made by a machine (and perhaps was). It is frustratingly linear, pushing the plainest story in the most pedestrian way.

The film has so little faith in the audience that we have to see snippets of a characters childhood and moments that show their scientific achievements. These can't be background moments, they have to be on screen. We learn about his condition and then develop a cure to it within five minutes, in a way that makes the storytelling feel utterly perfunctory. Why not just start from the cure and have the previous parts as implicit?

Another fatal flaw is introducing a more interesting character that only lampshades how dull the protagonist is. Leto is awful, no surprise there. Matt Smith is kind of fun, and him wanting to be a vampire is a much more compelling and entertaining arc than Morbius' predictable struggle with being a character with zero character. Amazingly, the film takes the approach of making Morbius the tragic centre that we should feel for, despite having him commit mass murder at the start. But it's okay, he doesn't do the later murders. Justice for Morbius.

This is awful. It looks abysmal and the biggest visual inspiration seems to be the PS3 game inFAMOUS 2, specifically the Festival of Blood expansion. As visually interesting as a 2011 video game... That's not high praise for a 2022 blockbuster.