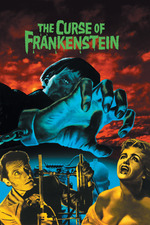 Hammer's first take on the much adapted novel still fascinates. This drops the expressionistic theatrics of James Whale's films, instead making a much more grounded drama. This is even evident in the look of The Creature, played by Christopher Lee. It is a wonderful realisation, feeling truer to the depiction in the novel and feelingly appropriately uncanny. This is helped by Lee's acting, who is able to evoke both humanity and an an animalistic quality.

The overall approach really aids the one thing that truly sets this one apart: the depiction of Frankenstein himself. Peter Cushing is the doctor, in one of his most iconic roles (in a career full of iconic roles). The novel makes it clear Victor is troubled, and adaptations lean into this; this version makes it clear that he is the monster and well reflects the gendered dynamics of the time of the source. It is refreshing to see this Byronic hero feel more like the sinister men that surrounded Shelley (more honestly Byronic than literarily). As we know, Percy manufactured the release of the novel so that it would reflect onto him and here we see Victor as this type of Machiavel. He is of a kind with the power hungry, hubristic and hypocritical men that would have surrounded Shelley, and that influenced her writing.

He is a compelling villain though, a realistic one. This is not a cartoonish indulgence, there are enough foils here to allow the film to make its political stance clear. What we see is a man entitled by society taking advantage of that status. The elements around this are not as strong; the film plays fast and loose with the novel but still feels the need to adapt certain bits that ultimately feel unnecessary. So much is thrown out, with a brand new framing device and completely new narrative moments, but some of what is retained doesn't feel at home here.

As a whole, though, this is still an impactful work. The more conventional approach makes it hit on a more human level, it makes Victor more of a convincing monster. This is not the safe distance of the theatrical; this does not feel like a fable. This is a story of realistic evil, and is more effective for it.