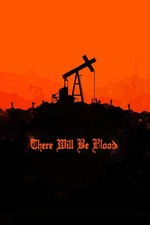 Man. I have such mixed feelings about this film. I really, really, really loved the premise—it's a (long) film about Daniel, an oilman who travels around with his crew, convincing towns to let him suck the land dry. With the help of his adopted son, he can sweet-talk his way into good deal after good deal, taking advantage of people in the process.

The film takes place in the early 1900s, and the vistas evoke a Bonanza feel (I grew up watching "cowboys" with my dad). The cinematography is beautiful and everything is perfectly planned. There's several shots throughout the film that linger on a character as they walk great distances to or away (or both) from the camera, and it's extremely effective at building tension.

The music is also worthy of praise, as it fits the film to a T. Mostly comprised of staccato sounds from various instruments, it's an unusual choice but ultimately perfect for the film.

Throughout the first 90 minutes or so, I was completely enthralled. I loved the story, I adored the character, and things were shaping up to give this film exceptionally high marks.

But then... everything sort of fell apart for me at the end. I kept trying to figure out where the movie was going, and in many ways it felt like it meandered for far too long. It's beautiful and interesting (and there's a boatload of symbolism to unpack), but it started to drag on. Soon it speeds up, things happen quickly, and then—it's over. The pacing of the second half of the film is just super weird to me.

But reminiscing on it, I realize now that what really made this movie so fascinating and enjoyable wasn't the story, it was Daniel. There Will Be Blood is a character piece, focusing on the life of this greedy oilman. The story is just a tool for us to get a deeper glimpse into his mind.

And I'm sure you're wondering: yes, there was blood.

The Book of Life