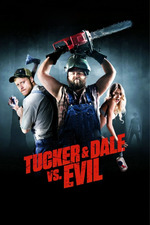 I wasn't expecting to watch this film today—we were supposed to see Boyhood but ran out of time and needed a shorter film from Mal's list. RNG declared Tucker and Dale vs Evil to be the victor. (We'll watch Boyhood soon, though.)

I hadn't even heard of this film, but the premise quickly presents itself as something unique and very, very funny: what if the cliché "college kids vacation in the woods" horror plot was flipped upside-down?

Honestly, if you have enough faith in me that you'll love this film, stop reading here and give it a watch. The below isn't too spoilery, IMO, but it's certainly better if you know little to nothing about this movie. Just a warning.

Upon arriving in the Appalachian Mountains of West Virginia, the car full of obnoxious college kids see some scary-looking hillbillies at a gas station. The kids leave in a hurry, but the place they're camping is close by where the hillbillies (Tucker and Dale) are staying. When one of the college girls nearly drowns, Tucker and Dale save her, and bring her back to their place to recover.

What ensues is an entire film of misunderstandings, and it's completely riotous. The kids erroneously believe the hillbillies have kidnapped their friend, and are bloodthirsty psychopaths after them, too.  The kids try to take out Tucker and Dale and hilariously wind up killing themselves in the process—the hillbillies don't even know they're being attacked. "This must be some kind of suicide pact" is probably my favorite line from the movie.

It's a very smart, well-written parody of the genre, in the same vein as Cabin In The Woods. It's still a gorefest, but you'll be laughing with each kill.

Highly recommended for both the horror fan and the person who can only touch horror if guaranteed laughs are involved. You know who you are, don't be ashamed.