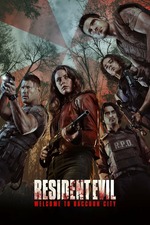 Resident Evil has officially seen its live action franchise rebooted this week, and holy fvcking shit was it a great time. Odds have been stacked against Welcome to Raccoon City since its conception, and with my small knowledge of the games, I think it looks pretty faithful. Much greater atmosphere and scares than the previous set of action movies, and a better cast, too.

Robbie Amell gave me everything I needed as a Chris Redfield main, and Kaya Scodelario, Hannah John-Kamen, Tom Hopper, and others round out the cast well. Avan Jogia's Leon Kennedy is going to be divisive as hell, but every scene that he was in felt elevated, and there's no denying he fits that role perfectly. This is a story split in two, and the final act comes abrupt and chaotic, though it never tries to be more than what it is. Pure fun, bloody video game violence with memorable villains and jaw-dropping set designs.

Soundtrack was amazing, scale was amazing, and with that post-credits scene, Sony would be stupid not to have a sequel greenlit soon. Definitely peaked my interested in Biohazard, and one of the BEST horror projects of the year for me. Post credits scene gave me such a good buzz.