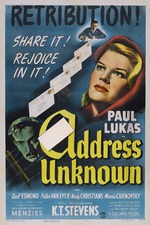 I have been a student of World War II films ever since I could turn on a TV or walk to the movies. Over the years, I’ve learned that because of propaganda reasons, films produced during the war had very clear missions to support the war effort, boost recruitment and inspire a “we will overcome” attitude. That, combined with the desire to entertain and make money guaranteed the war was going to be sanitized. Thus it was a surprise to watch Columbia Pictures’ powerful 1944 film, “Address Unknown,” which was one of the first studio films to examine the rise of anti-Semitism in Europe and the early traces of the Holocaust. Directed by the legendary production designer William Cameron Menzies (“Gone with the Wind”) in a striking cinematic style, which was Menzies’ trademark, the film starts out as a friendship story between two German nationals living in San Francisco with their respective families. Art dealer Max Eisenstein (Morris Carnovsky) is a Jew, whose daughter, Griselle (K.T. Stevens) is an aspiring actress. Paul Lukas is his friend, Martin Schultz, a German national with a son, Heinrich (Peter van Eyck) who works with Max and is in love with Griselle. The story gets going when Martin and his family travel back to Germany for a summer vacation, taking Griselle with them so that she can start her acting career on the German stage. This trip coincides with Hitler’s rise to power – and slowly the forces of evil begin to impact our protagonists – a story told with a great deal of correspondence between the two friends. This is a relatively short and memorable film, with strong performances. Kudos to Menzies and Herbert Dalmas’ adaptation of Kressmann Taylor’s 1938 novel. Stay safe.

He Walked by Night