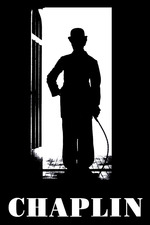 One of the biggest gaps in my knowledge of film history would have to be the Silent Film era. I have to admit I am a talky guy. So any opportunity to enrich my understanding of a huge early chunk of Hollywood history is welcomed. Thus, when "Chaplin" was featured the other night, I tuned in. I'd seen pieces over the years, but it was my first opportunity to see the entire film, and I was very impressed. Robert Downey Jr. lost the Best Actor Oscar that year to Al Pacino's meaty performance in "Scent of a Woman," but he's a revelation as well. Director Richard Attenborough pours detail after detail into this epic story of the comedy genius who created the immortal little tramp character, and he assembles one of the great casts of all time, with strong kudos to Dan Aykroyd's Mack Sennett, Anthony Hopkins as the biographer, Geraldine Chaplin (Charlie's daughter) playing his mother, Moira Kelly as one of Charlie's first loves, Kevin Kline as a zesty Douglas Fairbanks, Kevin Dunn as a zealous J. Edgar Hoover, Diane Lane as Paulette Goddard, and so many more. Sven Nykvist's photography is stunning, and John Barry lends great support with his score (although at times, I must say, I thought he was using tracks from "Dances with Wolves,' especially when Charlie arrives in California). Downey has emerged as one of our brightest and most eclectic talents - and all of his gifts are on strong display here - from the broadest strokes to the most subtle mannerisms, he is Chaplin. Enjoy, stay safe, and, for God's sake, please vote.