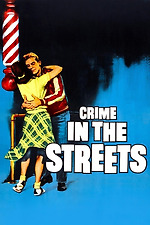 In the movies, there have been actors who bring tension and considerable edge to nearly every performance. John Cassavetes was the poster boy for that style. So, when I noticed that his 1956 film “Crime in the Streets” was streaming, I decided to check it out for the first time. I always wondered what early Cassavetes looked like. In a dark portrait of New York City gang life – so dark it makes “Rebel Without a Cause” look like a Disney film, Cassavetes plays Frankie Dane, the leader of the Hornets, whose compatriots include “Rebel’s” Sal Mineo and future film director, Mark Rydell. Based on a script by screenwriting legend Reginald Rose, the movie takes place mainly on the streets opposite the tenements where they live. Frankie lives in a tiny flat with his mother (Virginia Gregg) and his brother, Richie (Peter J. Votrian). Trying to keep the kids on the right side of the law is a very good James Whitmore as local social worker Ben Wagner. But he’s got his hands full because kids like Frankie have a chip on their shoulder the size of the New York Public Library. Frankie and his boys smoke, and hassle pedestrians, smoke some more, and smoke some more after that. This is definitely a five-pack movie. But, as usual, director Don Siegel, keeps the tension brewing and the focus squarely on Frankie. There’s not a lot of action in this flick – no car chases, very few fights. Lots of brooding, though. But it works. Credit Franz Waxman’s jazzy score for lending a ton of atmosphere to this dark street scene. And you can see why Cassavetes’s style was soon in demand across all mediums. Stay safe.