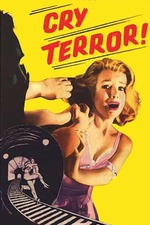 Being a huge James Mason fan – particularly for his two 1959 smashes – “North by Northwest” and “Journey to the Center of the Earth,” I decided to fill in my dance card by watching his 1958 film “Cry Terror,” directed by Andrew Stone. It’s a nail-biter with an amazing cast. Mason – a million miles away from his Philip Vandamm in the Hitchcock film, plays nervous electronics shop owner Jim Molnar who is duped into building a deadly time bomb by his former Army pal Paul Hoplin (Rod Steiger, dripping villainy). The latter wants to extort money from an airline, so to ensure Molnar’s cooperation, he kidnaps his wife, Joan (Inger Stevens, as a very resourceful victim) and holds Molnar and their daughter hostage as well. Jack Klugman, Neville Brand and Angie Dickinson play Steiger’s co-conspirators (I had never seen Angie as a heavy – and she’s in full heavy mode here – wow). Kenneth Tobey of “The Thing” plays the lead FBI investigator. I had always remembered director Andrew Stone from his ambitious sea disaster film “The Last Voyage,” where Robert Stack has to desperately figure out a way to save his trapped wife (Dorothy Malone). As a director, he really knew how to milk the tension and “Cry Terror” does it beautifully. Check it out and stay safe.