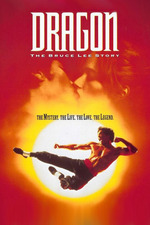 Bio-pics are often a mixed bag - sometimes too formulaic, other times too revisionist. After seeing the controversy surrounding Tarrantino's depiction of Bruce Lee in "Once Upon a Time in Hollywood," I came across "Dragon: The Bruce Lee Story" (1993) and decided to tune in. What a pleasant surprise! Jason Scott Lee stars as the iconic Chinese-American who comes to San Francisco from Hong Kong with a dream to be someone. I found Lee so likable that it was impossible not to like the movie. Life was no duck walk in America for the young immigrant - he faces prejudice everywhere, and when he starts to teach his special form of martial arts to local students, even the Chinese martial arts community is against him - emphasizing that offering those secrets is a taboo. Bruce goes ahead anyway and gets involved in one extremely violent battle with another martial artist. Under Rob Cohen's slam bang direction (this is the guy who directed the first "Fast and the Furious" film), the fighting sequences in this film are truly thrilling. Bruce Lee's acrobatic moves were stunning to TV and film audiences at the time - and no little effort was spared in recreating how impressive Lee was in a fight. Lauren Holly as Bruce's romantic interest and future wife is also terrific - vulnerable, yet determined to help the young protagonist carve out a life in America. It was also fun seeing Robert Wagner portray the producer who casts Bruce as Kato in "The Green Hornet" television series. Although he died very young (he was only 32!), Bruce Lee continues to be a world icon - and his early Hong Kong martial arts films and his big Warner Bros. feature "Enter the Dragon" popularized a whole new genre of action films that continues to influence cinema today. Rob Cohen, Jason Scott Lee, Lauren Holly and a great creative team did him proud. Check this one out! Stay safe.