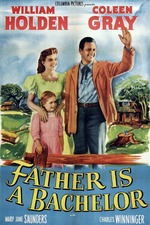 Father Is a Bachelor

William Holden was one of Hollywood’s most popular stars of the 1950s. However, before he broke out in 1950’s seminal drama, “Sunset Boulevard,” he was unhappy with his roles. Too many light comedies – nothing to sink his teeth into. Despite this, I found myself completely charmed by his performance in “Father is a Bachelor” (1950). Holden plays Johnny Rutledge, a vagabond performer who tours the backroads of the eastern seaboard with Professor Ford (Charles Winninger) an elixir salesman (Warning: Holden’s initial appearance is a singing number in blackface – yikes!). When Ford is jailed for fraud, Johnny is jobless, homeless, and broke. While fishing one day off the Chalotte family pier, he discovers and befriends the five Chalotte children, all named for months of the year – Jan, Feb, March, April and May (Feb, a harmonica virtuoso, is portrayed by Billy Gray, who the following year was hanging with Michael Rennie’s alien, Klaatu, in “The Day the Earth Stood Still”). We soon discover that these children are orphans who are living entirely on their own. Before this film, my encounters with Holden were all dramatic roles (except for the original “Sabrina”), so this new light version of the actor was fascinating. I mean, William Holden sits down and sews a dress for little May. It’s a little moment I found adorable. Colleen Gray plays the Mayor’s daughter who falls in love with Johnny. She’s great. So check out “Father is a Bachelor” ( I think it’s still on TCM On Demand) and prepare to see a William Holden that is the antithesis of Joe Gillis in “Sunset Boulevard.” Stay safe.