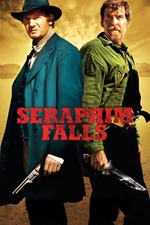 One of the joys of this horrible Covid year is finding films in the streaming verse that I had never seen before. They’re not all classics by any means, but there are some interesting ones. I came across the western “Seraphim Falls” (2006) recently, attracted by the stars – Liam Neeson and Pierce Brosnan. This is an edgy fugitive-on-the-run picture, with a bearded Pierce being chased across the post-Civil War southwest by a posse led by the granite-faced Liam. Like Leonardo di Caprio’s “The Revenant,” released a decade later, this is a movie in which nature is a major character. The story begins in mountain snow where Pierce’s Gideon character is trying to cook a meal, when suddenly he’s shot in the arm by a member of the onrushing posse. The odds are 4-1 here, but somehow Gideon continues to beat those odds. Like a Fellini film, we meet tons of people along the way – ranchers, railroaders, Native Americans, bank robbers and, of all things, Anjelica Huston as an elixir peddler. And we move from snow to arid desert vistas. Through most of this movie, you have no idea why Gideon is being pursued by Neeson’s Carver character. When the reason is finally revealed in flashback, it’s a stunner. Kudos to writer/director David Von Ancken for keeping the energy going, John Toll for his brilliant cinematography and a layered score from Harry Gregson-Williams. Brosnan and Neeson have become iconic action heroes, and credit them here with two very unusual layered performances. Stay safe and here’s to a New Year that brings us back. To quote Churchill, “Now this is not the end, it is not even the beginning of the end, but it is perhaps the end of the beginning.” Happy New Year.