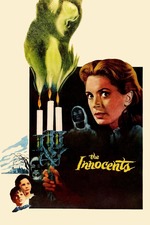 I tend to prefer ghost stories over horror films - especially elegant ones like director Robert Wise's "The Haunting" and Hitchcock's "Rebecca." Thus, when I saw that TCM was running director Jack Clayton's "The Innocents" (1961)," I decided to fill out my dance card and catch what turned out to be a terrific and creepy journey into the 19th Century British paranormal world. The very elegant Deborah Kerr portrays Miss Giddens, a governess who is hired by Michael Redgrave, whose character is the Uncle to his late brother's children. He literally wants nothing to do with these youngsters, and expects Miss Giddens to leave him alone. Part of my attraction to seeing this film was noticing that the two children were played by Pamela Franklin and Martin Stephens. The former, making her film debut, would go on to play everything from Disney's "A Tiger Walks" to TV movie thrillers like "Satan's School for Girls." I remember her as a grownup in one of the great ghost stories of the 70s - screenwriter Richard Matheson's awesome "The Legend of Hell House." Martin Stephens who would soon leave acting for architecture, appeared the previous year as the leader of those frightful blonde children in the very memorable "Village of the Damned." He makes a very effective troubled child. This is one of those "things that go bump in the night" movies. Lots of candelabras piercing the darkness, creepy sounds of crying and laughing and glorious photography from the master, Freddie Francis. Based on author Henry James' story "The Turn of the Screw," with a screenplay by William Archibald and Truman Capote, the film also features Megs Jenkins who plays the housekeeper. Her voice was very distinctive and I recognized her in the brief role of Isaac's maid in "Ivanhoe," who is forced to turn against Elizabeth Taylor's Rebecca character. I would not watch this one home alone - my opinion. Stay safe, indeed.