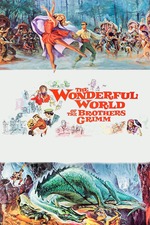 The Wonderful World of the Brothers Grimm

During these most difficult times - especially this past week - retreating into the movies can restore one's spirit. Hence my desire to see "The Wonderful World of the Brothers Grimm" this past week. Unlike other films that we associate with the marvelous George Pal (he directed the fantasy segments and was the uncredited producer, why uncredited I don't know), I have not seen this multiple times - so it was a pure joy. Lawrence Harvey and Karl Bohm play writers Wilhelm and Jacob Grimm, who are trying to eke out a living in 19th Century Germany. Jacob is a dedicated historian and prolific author, but Wilhelm is obsessed with fairy tales, spending time with gypsies and flower vendors who tell their fanciful tales, while Jacob painstakingly writes the local Duke's (a very funny Oscar Homolka) biography. Interspersed between their real life story (Jacob eventually falls in love with Greta (Barbara Eden), Pal directs some marvelous fantasies that feature actors from all his films. Russ Tamblyn (Tom Thumb) returns as a woodman who is given a cloak of invisibility from an old gypsy woman (Beulah Bondi), which will help him win the princess ("The Time Machine's" Yvette Mimieux) and solve a seemingly impossible riddle devised by the King (Jim Backus); "Tom Thumb's" Terry Thomas and Buddy Hackett - perfect comic foils - play a cowardly knight and his loyal servant - as they go dragon hunting. And Harvey returns as the Cobbler in a heartwarming Christmas story that features Pal's terrific Puppetoons, come to life to help same Cobbler finish his work. Speaking of Harvey, 1962 was the same year he portrayed humorless brainwash victim Raymond Shaw in "The Manchurian Candidate." It was truly delightful to see him in such a lighthearted, whimsical role - who knew that the same man who also played humorless William Barrett Travis, the defender of "The Alamo," could be so darn funny. Kudos also to director Henry Levin ("Journey to the Center of the Earth") and the team that put together this original Cinerama release. Stay Safe.