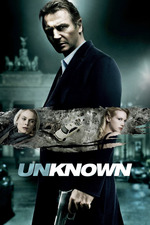 I'm a big Liam Neeson fan. I remember seeing him for the first time as a background bandit in 1983's epic fantasy "Krull," and of course we all saw him as the wonderful title character in "Schindler's List." Since he started doing his action movies like "Taken," I've found he delivers almost every time out. Thus, I looked forward to "Unknown" (2011), which has become one of my favorites. In a plot that begins to resemble an episode of "The Twilight Zone," Liam plays Dr. Martin Harris, a scientist who arrives in contemporary Berlin for an international conference with his gorgeous wife, Elizabeth ("Mad Men's" January Jones). Unfortunately, he forgets his briefcase on a luggage cart at the airport and has to go retrieve it. He gets into a cab driven by Gina (the always stunning Diane Kruger), which promptly gets into a horrific traffic accident and plunges into the river. Dr. Harris wakes up in a hospital bed with amnesia, and when he finally makes it back to the hotel where he left his wife, no one recognizes him, not even his wife, and there's another man posing as him. You see the "Twilight Zone" connection. Directed by Jaume Collet-Serra from a great script by Oliver Butcher and Stephen Cornwell, based on Didier Van Cauwelaert's novel, this is a compelling movie that shows off Neeson's strengths at every turn. When he gets angry, things begin to happen. Check it out. Stay safe.