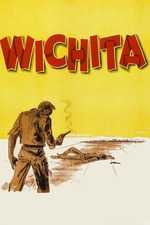 I must confess to be way behind in my appreciation of Joel McCrea. I didn’t see “Sullivan’s Travels” until this year, I barely remember “Foreign Correspondent” from years ago and I still need to see “Ride the High Country.” So, when I had an opportunity recently to catch 1955’s “Wichita,” I jumped on it. Usually films that have cities for titles are kind of bland and B-movie-ish. However, in this case, I immediately noticed that McCrea was playing Wyatt Earp. I’m a big Earp fan, so I decided to see how McCrea compared with Burt Lancaster, Kurt Russell and Kevin Costner. McCrea is terrific as the legendary lawman who comes to Wichita, not as a sheriff or law enforcement official, but as a private citizen looking for a business opportunity. In a solid script by Daniel B. Ullman, Earp’s prowess with a gun comes into play almost immediately when he disarms some cowboys intent on stealing his stake. One of them is played by Lloyd Bridges, returning to the bad guy side he showed in “High Noon.” The film is loaded with some of my favorite character actors, including Edger Buchanan (also, surprisingly, in bad guy mode), jack Elam (as a cowboy, no surprise there), Peter Graves, John Smith and more. And, delightfully, we’re treated to newcomer Vera Miles, a year before she starred in John Ford’s “The Searchers.” Interestingly, she plays another Laurie, in this case, Laurie McCoy, daughter of the Mayor. Under Jacques Tourneur’s capable direction, this movie keeps moving with lots of energy and McCrea fills every frame with power and command. He’s a force to be reckoned with as he reluctantly becomes the town’s marshal. Stay safe.