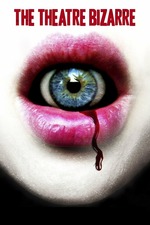 6 directors handed a bunch of cash and given zero oversight. Full creative control to make a piece of a horror anthology. This movie was produced by a concrete company, and is the best film ever produced by one.

Would have given it 3.25 if I could. The first story stars the poor man's Greg Sestero. The second stars the poor man's Tommy Wiseau. Most of the stories in this are uneven. The faux Wiseau starts out doing that thing Tommy did where the lines trip over each other in a vague-euro-accent and the words don't seem to match the feeling. By the end though, I thought he was killing it. Tom Savini's film had some jarring lighting changes, like the DP called in sick a couple days... or maybe they didn't have time on a couple shots to light it as well as they'd have liked. But here, it was plenty gross.

The further this anthology chugged along the more on board I got.

Udo Kier is a fucking treasure. He walks around a stage being a creepy marionette... Sold!