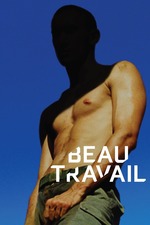 Criterion Channel has a Female Gaze collection of films by women directors that also have women DPs. Beau Travail had long been a blind spot and a film I've frequently seen on Best Film lists where perhaps 5 other works by women will be mentioned out of hundreds. So, it seemed the perfect opportunity to find out why.

Things I didn't know before watching this film:
Anything about it but the poster here on LB and who directed it.

That Djibouti was a country. 😳

That this was loosely based on Billy Budd (but wow, did I feel it throughout).

Things I'm grateful for:
I watched this alone. My husband would have hated its "slowness" and well, being everything that people hate about "artsy French cinema".

I knew Denis Lavant from Holy Motors and long ago from Lovers On the Bridge.

Things I learned:
It is fascinating to see a film about military men and their training through the female gaze. It added something like an homoerotic tension to what often felt like mating rituals.

Were it not for the very end, it felt as if this was timeless.

The ending is surprising in the best way.

And finally, it seems to me that this makes lists like 2001 films to see and They Shoot Pictures, etc because, umm, men men men doing "manly" things.