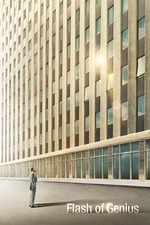 Corporations are very greedy, no matter how much money they are making they look to minimize expenses at any cost, and all that is OK and logic thinking from some point of view, BUT, of course its not well when people like their employees and generally people who are taken into their web of politics and actions suffer.

This film is about Robert Kearns, a family man and professor of engineering to whom an inspiration muse come and his light bulb lights. He is creating a whipper which works on timed intervals rather then constantly. Pretty revolutionary for its time. He patents this creation of his and he brings it to Ford. He shows it to them but he doesn't let them see under the hood for them to see what is this wiper made of until he gets a contract. But still, he gives them a demo product for them to test and they steal his idea. Couple of years later he begins to sue them and the fight in court begins.

Robert Kearns is a deep and complex character, he is elaborated excellently. For the characters of his family i cant say the same, because we don't have any development and we rarely see them, which is a fault. And generally this film is not colourful enough, we can see the director didn't experimented much and had a plain approach, but i don't dispute this film that is a nice peace and that it needs to be watched, this film gives motivation and persistence.