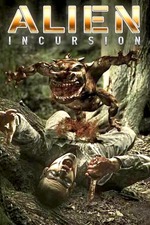 A cheapo alien monster action film about a bunch of hikers in the woods who find themselves fighting for their lives after a meteor lands carrying alien parasites, and a black-ops military unit is sent in to contain the situation.

This film is a low budget effort, not unlike the typical SYFY films, with the typical group of monster-fodder characters. The alien creatures look like mutant monster frogs, and are cheap CGI stuff, but it's fairly entertaining if you keep your expectations low and just fancy a dumb monster flick. It's not great but I have seen a lot worse.