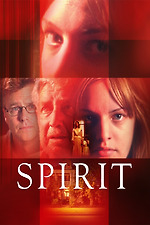 Pedestrian TV movie about a haunting, notable primarily for Elisabeth Moss as a moody teen coping poorly with her mother's death, smoking cigarettes and hanging out in graveyards with the cool-but-sensitive boy next door. (Austin O'Brien has some serious James from Twin Peaks energy, right down to the motorcycle and the well-coiffed block of wood blankness.)

This was Michael Slovis' first credit as director but he's worked primarily as a cinematographer before and since (I recognize his credit from Breaking Bad) and it's not hard to see why. This has an emotional flatness not solely attributable to the mostly-reliable TV actors or the budget which can't quite accommodate the Changeling/Poltergeist combo the script seems to be going for. Everyone seems lost at sea part of the time, although Moss is mostly steady. The movie's not very good but the novelty of seeing this right after Invisible Man (another gothic-flavored exercise not otherwise worthy of her lead performance, separated from this by nearly 20 years) was interesting.