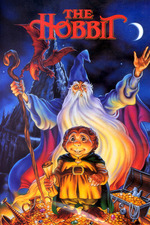 I first saw this during the Golden Age of Science Fiction and Fantasy (i.e., when I was 12). I remember accompanying my father when he rented this on VHS from our local mom-and-pop place that was our primary source for non–GoodTimes Home Video titles. Or, more accurately, I have a specific memory of going with him to the Baskin-Robbins franchise a couple doors down for ice cream that day. An excursion that was extravagant and unusual enough in my childhood to elevate that day, screening included, into an Event that stands out three decades later, the forests of Mirkwood and mint chocolate chip flavor forever linked in my mind.

I’d encountered a “halfling” thief before in Dungeon of Dread (the first of TSR’s Choose-Your-Own-Adventure–style Endless Quest books), but the Rankin/Bass adaptation was my first direct exposure to Tolkien’s foundational fantasy fiction tropes, and led me to reading the books, while forever shaping my interpretation of the material. Brother Theodore’s performance as Gollum in the “Riddles in the Dark” segment (which might as well be a standalone short film within this adaptation) is genuinely great, and in some ways unsurpassed by Jackson’s films despite the unfortunate character design. (To me, Serkis is a better Bruce Way—er, Sméagol, but Theodore is Gollum.)

Years later, I was the sort of awkward nerd who read The Hobbit in installments to my first serious girlfriend in high school as we sat in her chaotic living room surrounded by multiple relatives and multiple TVs blaring in multiple languages. I couldn’t (wouldn’t) offer her an escape to my own world, but I could try to offer her the world I had so often escaped to. My Gandalf was the best John Huston impression a seventeen-year-old softboy could murmur, my Bilbo the Orson Beaniest—but there was as little as possible of Brother Theodore in my Gollum, who still unnerved me even then, who haunts me even now.

The Lord of the Rings

What We Left Behind: Looking Back at Star…