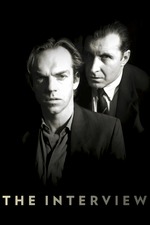 The glib observation is that this provides an unexpected through-the-looking-glass parallel to the early "Gestapo crap" portion of The Matrix, with Weaving as the nobody hauled away by blank-faced armed men in dark suits. The movie deserves better than to be thought of purely in those terms, though.

The Interview feels more like a stage work at times: scenes which end in blackouts as often as not; a structure which seems to be a simple rising/falling action but turns fractal before the end. The parts that turn this into more than just a single-set three-hander seem superfluous at first, exactly like a stage play "opened up" in a film adaptation, but are ultimately essential to the story being told.