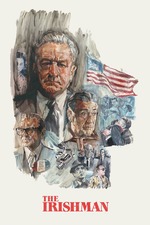 Scorsese has of course always been a moralist, but those of us who tend to wish he would be a little more didactic get what we wanted this time, for good and bad. It’s the usual tale of young men on the make guided and stifled by the mean old bastards, but the scope and the cast allow us to be in the POV of the mean old bastards this time, which makes all the difference in this latest tale of damned souls steering their own ships to hell. The leisurely pacing is exactly right: an old man’s tale about old men which could have gotten to the point a lot faster but would have missed the texture of the thing.

Sheeran was most likely a fabulist about his degree of involvement in some events, which gives The Irishman the freedom to be a little more grandiose and explicit. The metatextual highlight of the conspiracy stew is Joe Pesci telling a connected guy to go meet “a fairy named Ferrie” before the Bay of Pigs. (Along those lines, I really, really wish that this movie could have had Frank Whaley in the lead instead of De Niro, but Scorsese is understandably more interested with playing with his own pantheon and his own myths; it's what it is.)

The de-aging tech is fine, although it has its limits. A digital facelift can’t give De Niro a young man’s gait, which is a problem when the septuagenarian has to display strong-arm tactics. The worst uncanny valley effect almost seems like a deliberate bit of misdirection, with Domenick Lombardozzi slathering on more makeup than Jiminy Glick.