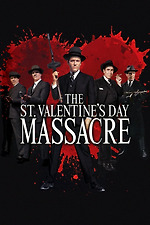 Neither Cult Status Corman nor Surprisingly Good, Actually Corman but Mainstream Journeyman Corman. Hardly extraordinary but has more than a few interesting touches.

At 6:45 on the last morning of his life, John May takes an early bus to work. He has been promised a $10 bonus if he can replace the transmission on one of the gang’s cars before noon.

Gangs as corporations chaired by unstable narcissists who are alternately enabled and stymied by their handpicked underlings, who themselves pocket the bulk of the profits generated by manual workers and filtered through middle managers, with unassimilated immigrants as good sources of pliant disposable labor. Capone in particular rejects boardroom procedure, a hothead who takes things personally but is not precisely a caricature. Both he and Moran are depicted as genuinely believing they are acting in self-preservation to counter their ruthless, thuggish opponent. They are, of course, both correct.

At 7:02 on the last morning of his life, Pete Gusenberg is considering ways to rid himself of Myrtle Koppleman. There are plenty more where she came from.

Though there are some anachronisms, and explicit comparison of 1920s gangsters to 1960s organized crime syndicates in the narration, the overall effect is a little quaint, stagebound, and stiff, like a period gangster flick that just happens to be shot in color from a script the censors forgot to cut all the ethnic slurs from. The most successful straddling of the two eras comes from George Segal as a heavy with seriocomic mad-dog tough guy bits lifted straight from Cagney and Widmark which play out long enough, and in enough detail, to become uncomfortable. (His knock-down-drag-out fight with Jean Hale and its coda are arguably the highlights of the movie.)

At 7:23 on the last morning of his life, Albert Kachellek, alias James Clark, is thinking of buying a new car. His status in the gang demands better than this.

Robards, notoriously miscast as Al Capone when Corman wanted him for Bugs Moran, feels out of place hissing Italian imprecations and ordering a hit on “that Irish sonofabitch.” Orson Welles, Corman’s first choice for the role, would have been even less plausible as Capone in terms of ethnic background and age. Still, even though they never would have actually shared the screen, Welles vs. Robards can’t help but feel like a more compelling clash of the titans than what we actually get, which is Robards vs. Ralph Meeker.

At 7:41 on the last morning of his life, Frank Gusenberg is wondering if he shouldn’t go back to one of his wives.

In his best no-budget productions, Corman excels at improvising jury-rigged solutions to keep a leaking ship afloat long enough to reach the shore. Here we get a sense of Corman the trained engineer, who meticulously diagrams his camera movements and recreations of famous gangland slayings, orchestrates complicated showers of exploding squibs, embraces docudrama narration, and employs satisfyingly pat psychological motivations to give a sense of inevitability to the reconstruction.

At 8:00 on the last morning of his life, Adam Heyer is calculating how much the cost of an operation for his wife will take from his savings.

The film’s matter-of-factness, which can feel flat at times, does give a certain heft to the violence, both implicit and explicit. People go down quickly and quietly, dead weight to be cradled, clumsily hauled out of the way, or stepped over as needed.

At 8:15 on the last morning of his life, Albert Wienshank has decided that his safety and his peace of mind are more important than $20,000 a year.

As far as the film is concerned, the issue with the “massacre” is less the violence, which isn’t that much more brazen than the other set-pieces in the movie, but rather the strategic public relations miscalculation on Capone’s part. In the film’s (utterly hypocritical, ceremonial, classic exploitation-picture) moral logic, Capone’s hubris is to ignore the signs that “people are getting fed up” with the violence, convinced that the frisson average people feel “when some poor stiff gets taken for a ride” in complicit mass media accounts will let him play Public Enemy Number One without consequence.

Alphonse Capone, while he is never tried for complicity in the St. Valentine’s Day Massacre, his role as the man behind it goes unquestioned. Three months later, he is in prison, and more than half of the remaining 18 years of his life are spent in federal penitentiaries. On January 25, 1947, Alphonse Capone, his mind gone, his body ravaged by syphilis, dies in his sleep. On February 4, his body is interred in the family plot in a Chicago cemetery.