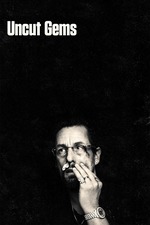 Fundamentally I am not the audience for this movie because it never seemed loud or chaotic or anxiety inducing or whatever. I don't wanna be like New York just be like that buuuut while I may not exactly know a guy like Howard Ratner I have known a half dozen guys exactly like Howard Ratner, and I have gone to a great deal of effort to make sure that I'm never in a position to meet any more.

This is more interesting around the margins than for what's front and center, and even that has some significant problems. The verisimilitude is marred by anachronisms and casting choices. Celebs playing themselves I can take, but then you can't pile on the cameos; it's too much.

Not that too much seems to be in these filmmakers' vocabulary, which in the end is what makes this both engrossing and enervating. None of these people are people I want to spend any more time with than I did (particularly The Sandman), which I think is what they're going for, but I was also seriously glad when the credits started. (My screening was bookended by some kind of reality-show wraparound with the Safdies and Sandler; I bailed before they could reappear, knowing that it would tip me from mild admiration to mere irritation.)