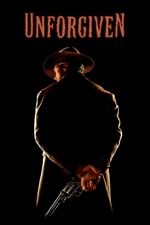 The culmination of Eastwood’s decades-long ambivalence with his on-screen persona and the all-American flavor of gun culture, codified through the Western. It’s his reply to The Shootist, only Clint didn’t have the courtesy to die immediately afterward like The Duke, so we got three decades more of minimalist prestige-lite movies as Eastwood’s cantankerous “social liberal, fiscal conservative” Libertarian routine inevitably drifted back to the populist wingnut grudges that have always energized his base.

For someone like me, obsessed with cinema-as-modern-mythology and intertextuality, who prefers to approach media as a series of crafted cultural artifacts and not necessarily works of art, Eastwood is a huge deal in my personal canon, and Unforgiven easily the film of his I am most fascinated by. When I first joined Letterboxd I seriously considered it for the fourth spot in my favorite movies list; if I hadn’t blanched at making three of the four picks Westerns it might have supplanted Miller’s Crossing. At any rate, this was easily one of my most-watched movies when I was a teenager dreaming of filmmaking in general, and screenwriting in particular.

Peoples’ script (which Eastwood shot nearly unaltered from a draft written eight years earlier) manages to work as pastiche, allegory, and revisionist Western simultaneously. (Revisionist Westerns are as old as the Western itself, but it’s hard to imagine Deadwood, in particular, existing in the form it does without Unforgiven.) I know the peculiar rhythms of the dialogue so well that I could still give the next line nearly verbatim in every scene.

There are innumerable criticisms I could make but it would be hard to separate them from the genre Unforgiven is exploring and critiquing. The gender politics, for example, are pretty much exactly what you’d expect from a Western originally called The Cut-Whore Killings where the only women characters are a little girl, a handful of sex workers, and two wives: one silent and disapproving, the other safely dead to be idealized. Frances Fisher’s outrage at her and others’ lot in life has to do a lot of heavy lifting here—in terms of plot, character, and theme—but her performance feels so raw and true that I think it works. (Anna Thomson’s excellent performance as the naïf with a Heart of Gold emphasizes the archetype’s unreality as much as the film deconstructs any of the “bad men, but not having no sand nor character… not even bad character.”)