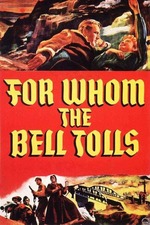 Set in the hills of Spain against the backdrop of Franco’s facist rule, explosives expert Robert Jordan (Gary Cooper) is tasked with aiding anti-facist rebels in blowing up a bridge, which forms a strategic military link for Franco’s army. Whilst in the company of the rebels Jordan meets and falls in love with Maria (Ingrid Bergman) as they work together to carry out the plan.

The cinematography and beautiful matte paintings of the Spainish hillside are exquisite considering the films age and the Blu-ray conversion does justice to this visual aspect. Cooper, looking every bit the Indiana Jones of the 1940’s, and Bergman’s on-screen chemistry works well, but can at times lose itself in trying to convince the audience of its sincerity. This could very well be down to the brutal elements of Ernest Hemingway’s novel being absent from the picture. However, this doesn’t prevent the film succeeding in its objective and is definitely a classic of its time.