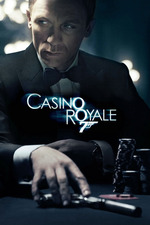 The Bond series has seen more than its share of ups & downs over the years, but Martin Campbell's Casino Royale is certainly one of its finest moments; having already resurrected the iconic franchise once before with Goldeneye, and coming after one of the series' lowest nadirs in Die Another Day, Campbell dispenses with the overreliance on plasticy CGI & gadget-fueled gimmickry that hampered that entry, and instead focuses on sharp, intelligent writing and insightful characterizations, balanced out with a ton of intense, mostly-practical action and stunts, giving you all you could ask for in any Bond, resulting in what is, currently, my absolute favorite entry in the entire 50+ year series.

It does this by utilizing franchise newcomer Daniel Craig to his full potential, distinguishing him from the other interpretations of Bond by emphasizing the icier, more brutal side of the character, having him straight-up execute a terrorist when he's unable to take him into custody, suddenly abandoning a woman when it interferes with business, and showing us just how he became a "00" agent in the first place (hint: it has to do with killing people).

Not to imply that Craig's interpretation has no sense of humanity, as that side of him is slowly but surely drawn out in the 2nd half of the film by Eva Green's Vesper Lynd, a British Treasury agent tasked with keeping an eye on Bond. Vesper's great beauty belies her equally impressive intellect, as she doesn't instantly fall in lust with James like so many other Bond girls, but rather, dismisses him as a reckless misogynist in their first conversation, as he returns the favor. Their acidic exchanges add a lot to the film, as they develop a trial-by-fire romance gradually, naturally, and when Bond is ready to leave everything he has in the world for her, we believe that he would, at least, for this one woman; wouldn't you?

Besides Green, Mr. Hannibal himself, Mads Mikkelsen, puts in another memorable performance as Le Chiffre, a financier of international terrorism, who, despite a grotesque physical deformity, isn't a classically intimidating Bond baddie, but rather, a refreshingly vunerable, down-to-Earth one, as he sees multiple schemes of his foiled, is directly threatened by some of his disgruntled "lenders" at one point, and his desperation to win a high-stakes poker game by any means neccessary is sweatily palpable throughout. Le Chiffre also helps Royale address the reality of a post-9/11 world in a palatable way for a "popcorn film", by having him be a funder of global terror, but not in a fanatical, ideological manner, but rather, in a cold, purely greed-driven way, having him keep one foot in the real world while still working as a villian within Bond's.

Finally, the action in Royale is uniformly outstanding throughout, beginning with a brutal, fight to the death filmed in black & white, and then proceeding with a chaotic, dizzying parkour chase that absolutely refuses to stop (in a good way), an intense car chase on the ACTIVE RUNWAY of an airport, and an inventive climax that takes place in a building slowly sinking into a Venice canal. The stuntmen really went all out for this one, and it shows, pretty much bringing the Bond franchise the closest it's ever gotten to being a pure Action film, without the film sacrificing any of the signature espionage thrills that have always called this series home. Despite an ever-so-slightly problematic 3rd act and a slightly overlong runtime, Casino Royale is highly suave, stylish, intelligent entertainment, and, as it ends with Craig's reciting of "Bond, James Bond", there is absolutely no doubt that he's fully assumed the mantle of the legendary character, and then some.