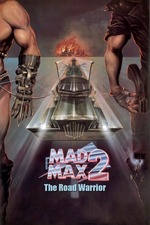 Mad Max was always a series I was aware of growing up, but never one I had much experience with firsthand; I watched the original movie about thirteen years ago, and remember being pretty bored by it at the time, so I just never got interested in seeing the rest of the movies after that. However, having enjoyed Fury Road for the first time last year, and being aware of the high praise for the 2nd film, I decided it was finally time to check out The Road Warrior, and I definitely did not regret the decision; a colorfully intense, high octane post-apocalyptic actioner, TRW is a great time, and well deserving of its status as a classic of early 80's Action.

Maestro Of Max George Miller achieves this by constantly including little details that color in the Aussie-flavored world of the film, as the costumers, props people, and actors give their all to bring its characters to larger-than-life, er, life, with the animalistic, boomerang-throwing "Feral Child", Bruce Spence's eccentric, rattlesnake-loving gyro captain, and of course, the barbaric, leather-clad gang of maruders, lead by Vernon Wells's wide eyed, war crazy "Wez", and the muscle bound, Jason Vorhees-mask wearing leader Lord Humongous, all adding a ton of personality to the film, and that's barely scratching the surface of the crazy cast in this movie.

And, while one could argue some of the performances here are a bit too over the top, I find them rather apt for the exaggerated, comic book-ish future of the world, and enjoy the zeal with which certain actors chew the scenery (what little scenery remains in "The Wasteland", that is). Additionally, there's a lot of small happenings that help to spice the film up further, and make you forget about the admittedly paper-thin plot; I mean, how can you not find Lord Humongus's "spokesman" getting all his fingers cut off when he tries to catch a metal boomerang morbidly hilarious? The crazy stuff comes so fast and heavy that you'd need to pause this movie every frame just to catch it all (and even then, you're gonna miss something), but doing so would only slow down the no-nonsense pacing that drives TRW so relentlessly forward.

The supporting characters serve as a welcome contrast to Mel Gibson's Max, who, after violently losing his family in the first film and going "mad" at the end, now wanders The Wasteland endlessly, only interested in surviving the gangs of roving thugs, and scavenging for what little "guzzoline" he can scrape up, his only remaining sentimental connection lying with his faithful, scrawny little guard dog (who he imaginatively names "Dog"). You could say he's a spin on the classic, strong, silent hero type we've seen so often, but he really isn't all that, er, heroic during Warrior, as he makes zero attempt to rescue a woman he witnesses being assaulted (and displays almost no emotion as he watches), only comes to the aid of the group of under-siege settlers because of the all-you-can-guzzle gas deal they offer him, refuses to respond to any of the hero worship they direct at him, and tries to abandon them to a certain doom as soon as he can.

However, I find Max's cold, self-centered pragmatism to be a refreshingly honest direction for a lead protagonist, and his character here both fits in perfectly with both Miller's savage cinematic world, and serves as a well-motivated continuation of the arc that began in the original film. And, conversely, Max's emotional distancing ends up rendering the moments where shows the barest hints of humanity, like his silent bonding with the Feral Child over the gift of a music box, all the more impactful for their rareness within the film.

Finally, the action within The Road Warrior excels in a gritty, old-school DIY fashion, with every stunt being executed without the sort of CGI trickery that, over the last few decades, has all too often been used as an unnecessary crutch for blockbusters. No, every action scene here was, in one way or another, pulled off for real, as the stuntmen go above and beyond the call of duty, putting life and limb at severe risk in order to fully achieve Miller's vision of violence. It looks like almost every stunt here came periously close to injuring someone (and indeed, some very serious injuries did occur), and the film's wreckless stunts, sheer sense of momentum, and overall vehicular mayhem all work together to create a thrilling rush within the audience. In the aftermath of TRW's unleashing, what was almost an entire subgenre of B-movies from all over the world tried to rip off its particular style, but all of them ended up being left far, FAR behind in The Road Warrior's post-apocalyptic dust. Don't miss it.