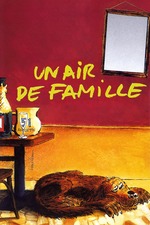 Un Air De Famille (Family Resemblances)
3.63 out of 5.00
Very solid French black comedy centered around a family birthday dinner. Theatrical and chatty, it's probably true that this would be more entertaining if seen in its stage version (although I'd need Supertitles for that!). There's very little done to take this play and make it cinematic, and that's probably a good thing. There was a Broadway play from years ago, Gemini, with which this movie shares more than a passing resemblance. Un Air De Famille is a little darker and more acid than most family dinner comedies (Moonstruck, for example, is far sweeter). The characters aren't deep, but their interactions hit home again and again. This one is for fans of movies like Big Night.

Tags: In the theatrical version, I'm guessing they didn't have a real dog; I didn't know you could get so sloshed drinking Suzes (learn something every day); Catherine Frot has a face meant for comedy (in a good way).
May 22, 2012 at 6:22 am

I Love You Phillip Morris