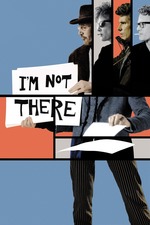 Perhaps the least accessible film I've seen directed by Todd Haynes, but no less brilliant. This is the film that Cloud Atlas so badly wants to be. The division and intertwining of Bob Dylan-inspired characters works because Haynes gives them each a distinct visual and narrative style, while uniting them through a common spirit. It's fitting that the portion of the film led by Cate Blanchett seems to be most everyone's favorite because it's such a strong distillation of the rest of the movie.

I always finish a Haynes film thinking, "I'm not sure how he got this made, but thank god he did."