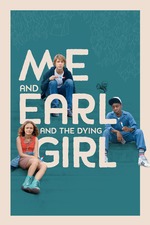 Folks, we deserve better indie films than this to be excited about.

There are...so many things wrong with this movie. I desperately, desperately wanted to love it and there were parts that I enjoyed, but on the whole this was a mess!!!!

Let's start with the title? Me and Earl and the Dying Girl. What is truly...startling about this title is how it gives ownership and identity to the males in the story and subjugates the female to a one dimensional side object: a dying girl.

If you're hoping that the film might give her some agency of her own, trust me, it doesn't. The entire movie treats Rachel (the best performance in the film by Olivia Cooke) as simply an object to advance our protagonist's development. Our boring, seen-it-before, white male protagonist. He doesn't like himself. He doesn't fit in. Blah blah blah. Whine whine whine. He spends the entire film bemoaning his existence while those around him (his mom, his friend Earl, Rachel - all of whom are more compelling characters) try to hold him up.

This movie wants so desperately to be different and to set itself apart as quirky and unique. It first tries to be ironic, but then it drifts into being genuine and sentimental - but it doesn't achieve either. Criticize "The Fault in Our Stars" all you want, but at least that mess committed to itself. Me and Earl and the Dying Girl just comes off as derivative (particularly in the area of cinematography that feels like a bad rip off of Wes Anderson) and false.

FALSE. That's a GREAT word to describe this movie. It's a facade of what a good story actually is!!! We, the audience, are told several times that the dying girl won't die. Guess what? SHE DIES. And what explanation does the film offer up to explain lying to the audience? "I truly didn't think she would." What the hell does that even mean? You cannot justify lying to your audience. Deceive them? Sure! But don't straight up lie to me? Because here's the thing: the movie lies to you as a straight out, obvious ploy at emotionally manipulating you. The film wants you to believe that she will live so that when she does die, it hurts more. If the film had actually done a good job of telling its story, it wouldn't have to outright lie to the audience to make its point.

- this film DESPERATELY needed a female voice behind the scenes. This is a movie written by a guy, directed by a guy, and based off a book by a guy. GOD does it show. It sets "dying girl" up just to advance our protagonist and it's exhausting and she deserved better.

- NEED EVIDENCE THAT THIS WAS WRITTEN BY A GUY? (this is an incredibly minor point, but whatever...) The prom theme gets introduced early in the movie as "Knight to Remember" THIS WOULD NEVER HAPPEN TAKE IT FROM SOMEONE THAT WAS ON PROM COMMITTEE THIS WOULD NEVER HAPPEN THIS IS THE KIND OF SHIT THAT A GUY WHO HATES PROM WOULD THINK UP TO DO AND IT DRIVES ME NUTS THAT SOME GUY WROTE THIS AND THOUGHT HE WAS BEING FUNNY BECAUSE IT'S NOT FUNNY IT'S STUPID