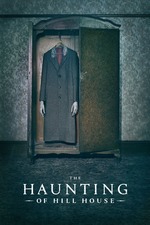 Like the cracks in the wall, the chillingly  unseen whispers in its halls, the black mold spawning and consuming everything in its path, it is everything left unsaid and yet a compacted torrential torment of everything said and never heard. This is Hill House— or rather Crain house. The Haunting of Hill House a crescendo of trauma reaching across time and space locking all in its powerful and deadly grip. These aren’t the walls Jack built. But they are strong and sturdy. Because The Haunting of Hill House is like that band-aid you ripped off too quickly, still full of the scars, the painful sting, and the all memories that come with it. As Flanagan the 21st century genius does it once more.

The series beautifully and seductively weaving a tapestry of life’s horrors through the rich conduit of the Crain family. A family whose specters cling to them and follow them wherever they go. Showing us ghosts come in many forms. The real ones and those imagined or of our own design. Evolved from our own spoils and trauma. The Haunting of Hill House is terrifying and exemplary in its dire authenticity of showcasing the profound reach of loss, loneliness, addiction, guilt, betrayal, and sickness. Like the mold of Hill house continuously seeping and rotting until it exposes its darker truths: that life is hard. For this I know first hand.

And for anyone that doubts sleep paralysis it’s very real and extremely frightening (this happened to me) and honestly I’ve never seen such an accurate depiction that conveys the frozen terror of it all so well. But the heart and beauty of Hill House lies not only in its endearing yet tragic honesty, but also its astounding use of metaphor and symbolic repetition used with an absolute finesse that only a master could pull off. As the series creeps into your veins making it chillingly unforgettable and you its unwilling host. For it replays through the dialogue like a broken record on a loop(similar into how we process pain) its various themes and ideas that are also present in Bly Manor: stories, memories, dreaming, love, denial. Because “it is you, it is me, it is us”. And this haunting repeated strangeness paired with  Flanagan’s brilliant use of the house as a metaphor for life’s discord and as a safe place from the dangers of the outside  world is oddly enchanting. An I could go into extensive detail but I’d be writing until the cows come home, so I’ll save that for a later watch or essay.

Suffice to say Hill House feels alive from beginning to end. Utterly powerful and poignant, yet endlessly remarkable in how it dissects trauma through the Crain family. Like one booming yet silent echo that reverberates how we all suffer and hurt. Reminding us we all carry are own ghosts and we can let these pains and our fears haunt us and consume us if we allow it. This of course is realized through the stellar acting by its cast, which may not be big house hold names but easily all pull their weight with the best of them. Luke and Nell, and Thea probably being my favorite. But each character is richly fleshed out and as dark and complex as the next despite appearances. And I truly hope more work comes their way as it’s highly deserved. While it is absolutely uncanny how much the younger and older versions of the actors look so much alike.

Likewise the writing and directing is some of the best I’ve ever seen period in film or TV. I definitely see what others mean by how much stronger this is under the guiding hand of Flanagan (who is now my new favorite director), than say Bly Manor. Hill House certainly feels sharper and tighter and Bly House is definitely a thematic continuation or expansion of this universe. Even the houses look eerily similar. And I really hope the series continues like AHS because it’s absolutely riveting. I also really like how they tackle madness in this to the point by the end you can’t even be sure if it’s real or imagined. Making this one far more scarier. I hid like half the time and my stomach was in knots and the hair on my arm was still standing after watching this. The true sign of a good horror thriller. So if you’re a sacred cat I’d recommend Bly Manor instead.

Hill House though isn’t exactly the book it’s inspired by and I agree with others it’s totally misleading to say this is based on the book by Shirley Jackson because it’s not an exact adaptation.  It’s more of a modern loose interpretation. Either way magnetic and magnificent. Sublime and highly substantial. The best piece of horror in recent memory besides a few others. This was like therapy on max, I‘m totally even more screwed up now than I was before, because to a degree this story is my life. However this was inspiring enough to send me into a writing frenzy, so thank you Mike Flanagan for that.

In short, The Haunting of Hill House will break you and likely make you cry like a baby. It’s an emotional roller coaster you’ll want to instantly binge. As it deftly balances horror and drama on emotional scale I’ve never felt since Call me By Your Name. And after watching both now I can say this one is stronger, but they are very different and both certainly worthwhile. Because despite all our trauma and pain in the end all we have is each other, so love one another — “the rest is just confetti.”