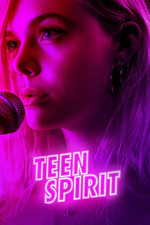 In a lot of ways, it's your usual Cinderella-like story of the underdog being picked out of a crowd to finally live the dream they aspire to, but the film never really seems to indulge in that. The glamour of it all, the lavishness and luxury and adulation you would expect would come at some point in such a story, is practically never shown - on the contrary, we mostly follow Violet in the drab, grey & impersonal audition rooms & backstage corridors, everyone around her looking mildly threatening and out of touch with her reality.

The film is constantly in this inbetween of reality & the constructed world of TV and fame in which Violet never really fits in. She barely interacts with the other contestants (who all seem much more at ease with the camera), and the general audience + the jury, who both hold Violet's fate in their hands when it comes to the singing contest, are practically never shown. This makes Violet's story an almost cynical one: she's mostly lonely and unhappy, with no exceptional talent besides a good voice, making her potential success story more and more out of reach and/or unappealing to the audience.
I'm not really sure this is the angle the film is going for though, but that's how I felt about it & it made me like it way better than I thought I would.

In terms of the songs, the soundtrack is very rich but I didn't find Fanning's covers particularly good, to be perfectly honest.
The beginning of the film may also be tedious for some, as the soundtrack just goes from song to song like a compilation of short (& boring) music videos, but I thought this omnipresence was a realistic way to show people's use of music today as background to our day to day life; also the use of Flashdance's What a Feeling when she goes to her second audition was just too good.