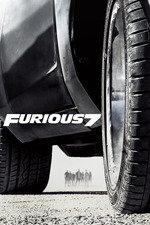 Furious 7 is not the best Fast (that’s Fast Five, although I haven’t had time to rewatch it this week) but it’s arguably the purest version of what these movies have become, namely this deeply sentimental tribute to macho brotherhood and its ability to defeat anything, up to and including physics. Also, this would make a weirdly interesting double feature with Once Upon a Time in Hollywood for a lot of reasons.