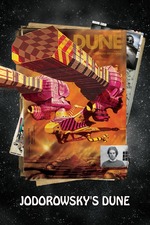 I might be this movie's biggest fan. Looking over my colleagues' ratings and reviews on Letterboxd, I see a lot of unimpressed folks, and a fair number who downright hated this thing, and hated Jodorowsky. I find Jodorowsky an absolutely delightful storyteller (the Keith Carradine anecdote! Vitamin E!), but to each his own. Some critics I've read are particularly offended by the documentary's claims that his unfinished DUNE in some way inspired many great movies that followed, like ALIEN and the original STAR WARS. The film makes bogus claims and therefore cannot be trusted.

Jodorowsky's elaborate storyboard and concept art book may or may not have found its way into the hands of the creators of later movies. Either way, I think the shared concepts and imagery prove a more important point: That Jodorowsky and his DUNE were way ahead of their time. If it didn't directly influence later works, it beat them to the punch.

But even that idea is really secondary to what the movie is ultimately about, which is about the importance of art and of attempting to make something great, even if it fails (and, indeed, even if it seems doomed to fail from the start). Another common complaint I've read is that Jodorowsky's DUNE sounds kind of terrible; that it would never have worked on the screen. What's odd here is that I tend to agree with these people; at best, I think this DUNE would have been a visually spectacular mess.

But so what? At the beginning of the movie, Jodorowsky lays out his ambitions with DUNE, which were to inspire the young generation of the time to expand their consciousness. The movie was never made, and in that sense, Jodorowsky failed. But what's remarkable about JODOROWSKY'S DUNE is not only that it finally brings the filmmaker's vision to life (in wonderful animated storyboard sequences), but that in doing so it fulfills his original goals. This documentary--and Jodorowsky's comments about life and its preciousness--makes me want to write a book or start a web series or generally get off my ass and do all the creative things I want to do with my life and tell myself I'm not smart enough or good enough to do. And if I or anyone else is inspired by this movie to actually make something, then that really is something revolutionary, whether they create a masterpiece or they fall on their faces.