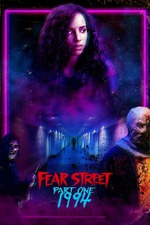 anachronistic music choices aside, its like an mtv movie every ten seconds theres a clip of an alternative hit song; it’s exhausting.

i actually read a ton of these books when i was a kid and i was happy to see tons of actual references to the books as part of the plot rather than just passing mentions. as far as the plot goes theres too much teen soap opera melodrama for my taste. it is very the netflix sabrina the teenage witch reboot. however theres some influence from scream here, with some pretty gruesome scenes tbh.

it does read less like a film trilogy and more like a three episode miniseries. this felt more like a tv show than a film, but thats fine. all in all it’s not as disappointing as i expected.