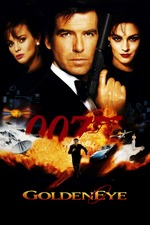 The first Bond movie that felt like mine. I went to see this at the cinema with my stepdad and i don't like even mentioning him 'cos it's the most problematic relationship, like, I think we basically tolerate each other more than anything… but, the point is, even when I was 15 and it was worse then than ever, I was still so excited to see this, and it didn't disappoint… and it still kinda felt as good nearly 25 years later. It's one of the sillier ones, they got Eric Serra to fuck around with the score, there's some serious kink in Famke Janssen's character (her excitement about dying excites me), some obvious but important progression in M's much repeated comments about Bond himself, and tons of incredible old-school model and stunt work, it was really one of the last bastion of its kind of filmmaking, and also has Minnie Driver doing bad karaoke.