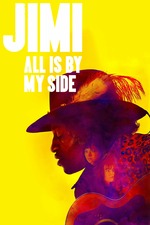 It's unfortunate this film was basically submarined due to the fact that they weren't allowed to use Hendrix's music.
The directorial debut of John Ridley (writer of U-Turn, Three Kings, 12 Years a Slave, and various Fresh Prince and Martin episodes) is an unpolished gem...a blurry sketch which occasionally crystallizes into razor-sharp focus.

For what it's worth, i LOVE that the usual greatest hits package of "Hendrix for Dummies" tunes are nowhere to be found. The monumental pretense is stripped away and we are left with a bare bones character study vs. a Voodoo Chile beer commercial.

Most of the music is fantastic, yet understated, Hendrix-inspired instrumentals from a house band. These are sketches of what the Hendrix "experience" was to become. I really enjoyed how Ridley used what he could to shape the tone of this period piece. There are only a few times when period perfect songs command your attention and you are drawn more into the music than the man. It's fitting the last few lines of the film have to do with inspiration. Ridley uses Dylan's "Leopard Skin Pill Box Hat" to perfection in an early scene to show how Jimi was influenced by the 60s troubadour and I think it is a very interesting commentary on how Jimi (because he was black) essentially had to go to London to repurpose his own people's music in order to break back into the states to join in with the white artists who stole it in the first place.

Ridley later floats in snippets of a note perfect cover of "Wild Thing" by Andre 3000 and the house band. This was so dead on I could have sworn it was the real deal. It felt like a hovering storm of primal rawk that was about to make landfall on the unsuspecting hippies of Monterey, California.

However, the real show-stopper is the Andre 3000/house band cover of The Beatles' Sgt. Pepper. This scene is mind-blowing in its accuracy and supercharged electric atmosphere. This scene conveys the spontaneous brilliance that was Hendrix better than any crappy facsimile of his famous Star Spangled Banner rendition or burning Stratocaster could have.

Andre 3000 is revelatory here. His talent is unmistakable and the pure joy in which he plays the Sgt. Pepper scene is truly something which grabs you in a way few actors have the capacity to do. Andre nails this role easily and with even more nuance than Kilmer as Morrison or Cusack/Dano as Brian Wilson. It is perfection.

The film itself is a mixed bag that ping pongs from the controversial domestic violence scenes to actual intriguing looks into the race relations of 60s London (which I highly doubt a white filmmaker would have touched). The look of the film is experimental and visually interesting. Sporadic smash cuts to black, The Limey-style cross-cutting, mixed media, use of old stock footage and varying film grains abound. If you are a hardcore fan of this specific scene you are in for a treat...casual fans of Hendrix are probably better off watching a concert DVD.

It's really a pity Ridley hasn't directed another film, he has real talent. I see he has no credits after this neutron bomb until he attached himself to another recent colossal failure (as a writer - Ben-Hur).

Jimi-All is by My Side ...despite having the worst title in the history of biopics... is an intriguing lark of a film and a showcase for the surprising talent of Andre Benjamin and John Ridley. I would love it if these two got together for another film...even if it is just to do a sequel where Jimi (off his triumph at the Monterey Pop Festival) is forced to tour the States with The Monkees and blasts the faces off unsuspecting 12 year olds and their dads (yes this tour really happened, and yes I would have paid to see it).