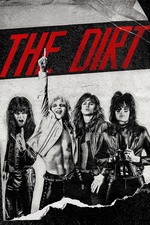 I didn't expect much going in because I just didn't feel comfortable with the trailer. These guys looked nothing like the real thing, and everyone was so CLEAN. Mötley Crüe looked like walking STDs and we worshiped them for it. The actors looked like they had just stepped out of That 70s Show.

I'm a nice boy so I won't describe what we see in the first few minutes, but suffice it to say that this is not a clean movie. I didn't feel the need to check into rehab, and it's still nothing compared to the book, but it is light years away from what I expected. The cast still didn't look like the real thing, but it became pretty endearing. Yes, that's Ramsay Bolton as Mick Mars, and Lee Harvey Oswald from 11/22/63 as Vince, and while there's no resemblance whatsoever, I didn't mind after a couple of minutes. It was part of the charm of the film.

It feels almost like a parody at times, but it isn't. The tone is perfect, with multiple narrators, drugs and booze being consumed in every scene and more nudity than an 80s sex comedy. I was afraid that this would be a sanitised version of glam metal, and it probably is, but not nearly as much as I thought it would be.

For me this sets the benchmark for music biopics going forward, and it's the best one in years. My favourite is Coal Miner's Daughter, and I'd happily watch it with The Dirt in an awesome double bill.