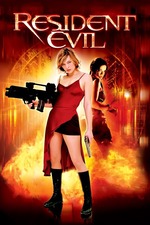 For an action/horror movie based off of a video game series, Resident Evil seems to defy the odds stacked up against it. I genuinely enjoy this movie not only as a guilty pleasure, but just as a zombie movie in general.

Resident Evil does a really good job of establishing a confined space that allows for a diverse set of environments yet still making the characters feel like they are trapped. Also, I cannot recall another serious zombie film that has been made semi recently that features slow walkers. It was refreshingly nostalgic to watch a zombie movie where the creatures are slow moving and not that smart, just simply out to eat some flesh.

But all of this is for naught if it weren't for Milla Jovovich. This is her movie. Alice is probably the most defining character of her career, and she is simply awesome here.

Take a moment and forget about what Alice will become later on in the sequels. In Resident Evil, her amnesiac head of security is just as clueless as to how to deal and cope with the situation as everybody else. There is a lot of running away, a lot of confusion, and a lot of failure. We learn along with her. This is what makes Alice great in my opinion. There is a sense of restraint and hesitation here, one of my favorite things that a horror movie can utilize. That is not to say that she can't handle herself when up against a wall (literally). She was head of security for The Hive, after all. The dog scene is one of the most absurd in the movie, but damn if it doesn't put a grin on my face every time. I even rewound the DVD to watch it again. The action is just fanciful enough to make things exciting, yet still reasonable in the overall terms of believability in all that is going on.

Resident Evil is an enjoyable zombie flick with an exciting and interesting lead character that Jovovich crushes itn her performance and really makes her own. Combine that with pleny of action scenes and good old fashioned zombie killing and you get a movie that I can pretty much watch whenever it is on.