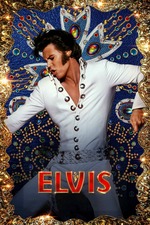 So I’ve just got home from seeing Elvis for a second time and it was still phenomenal.

The review will contain mild spoilers so beware.

Director Baz Luhrmann is the perfect choice to direct Elvis because of his stylish direction and as well as his frenetic editing along with the glitz and glamour.

The first half of the movie is more of a montage with it going into Colonel Tom Parker’s background at the carnival. Tom Hanks plays Colonel Tom Parker excellently who also narrates the story through his eyes.

From 1968 the film slows down to where Elvis (Austin Butler) gets caught in a trap in Vegas. One ballsy move the movie makes is making it based on the relationship of Tom Parker and Elvis which works fantastically.

Austin Butler as Elvis was fantastic, he puts his heart and soul into the role. Definitely Oscar worthy from Austin.

I did feel tension between Priscilla (Olivia DeJonge) and Elvis (Austin Butler)  where she breaks up with him.

One of the most fun scenes was where Viva Las Vegas plays and we get introduced to the Memphis Mafia.

One of my favourite scenes in the whole movie was when Elvis orchestrates his band in the Las Vegas rehearsal.

The dramatic scenes was brilliant especially the show down with Tom Parker and Elvis.

I’m not going to ruin the final 25 minutes of the movie. But what I will say I had a lump in my throat and then I had tears in my eyes it’s was really emotional for me.

Mandy Walker’s cinematography is gorgeous. The soundtrack is brilliant but Elliott Wheelers score was magnificent.

I find it really upsetting how some one like Elvis who I look up to as a hero dies at the young age of 42 he had his whole life ahead of him.

Overall it’s a phenomenal movie which I highly recommend.