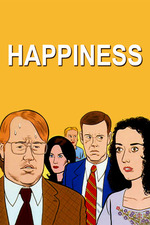 Why did I watch this? I'm a masochist. While watching Happiness, I felt dirty, broken, disturbed, and uncomfortable. I also laughed out loud multiple times, followed by long periods of me hating myself. I used to think I liked dark comedy… but now I'm not so sure. Everyone is great in it, it's brilliantly written, it's tonally jarring, and it's really well-done. It doesn't make light of the extremely heavy subject matter at hand, which would've made it easy to hate this film. In case you're unsure what it's about, it tells the story of a troubled therapist who moonlights as a child rapist. He's married to a woman who has two sisters, one of whom is a narcissistic writer fielding aggressively sexual phone calls from a creepy stranger across the hall (Phillip Seymour Hoffman), and the other is a woman who lets herself be treated like shit by the worst men. My brain hurts. My heart hurts. I just want to rewind time back before I ever heard of this film and became curious about it. I just want it to go away.

Suggested to me from my Fucked-up Modern Relationships list.