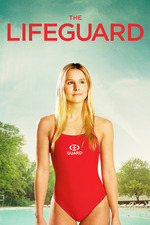 I have to use a term I hate to use, so let me just get it over with quickly: underrated gem. Kristen Bell doesn’t have to stretch herself too thin in The Lifeguard but her restraint contributes to the film's gravitas. From a distance, the film looks like a shallow character study of a woman in the midst of a quarter life crisis. Up close, it's really hard to judge someone who is brave enough to take a break from her comfortable life as a reporter in New York City in order to find happiness in her hometown in Connecticut. She doesn't care about being liked or accepted. Truly connecting to others and taking control of the narrative of her life are her short term goals.

It actually shares a lot of plot elements with last year's Hello I Must Be Going, the main difference being that this character is a lot harder to like than Melanie Lynsky's. She moves back in with her parents after an article she submitted wasn't given the attention she felt it deserved. She takes an unapproved leave of absence which could result in her termination and sets up a job lifeguarding at the hometown pool. There are many subplots including a teen who is suffering from depression, the difference between how she treats her parents, her closeted gay friend's self-acceptance, and her best friend's stressful experience trying to get pregnant.

The central conflict of the film is an inappropriate relationship she forms with an underage teenage boy who has an old soul. There are many sexual encounters depicted between the two in which there's little questioning of the legality of their actions and just lots of chemistry. The fallout from their relationship was anything but what I expected. I give it up to the writers for subverting audience expectations of how this would end (or at least those like me who felt like we saw the ending coming a mile away). The film doesn't rely on sheer heart or sincerity to tell the story. Instead, it shows the complexity of human emotion through explosive situations and subdued reactions to them. Liz Garcia is an exciting new voice in cinema created by women about women's stories.