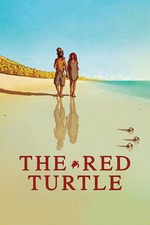 The Red Turtle is the story of a man who gets stranded on an island which is rich with natural resources but completely devoid of other people. After exploring the island, the man succumbs to loneliness and builds a raft to leave. However, the raft is destroyed by an unknown force, which the man discovers to be the titular red turtle during a later attempt to leave the island. To give away any more of the plot would spoil the the entire film.

The best way to describe The Red Turtle is that it's the animated equivalent of a folktale. The film has a fairly simple plot, archetypal characters, and an easily discernable message about life at its core. It also has a certain mythical quality which is reminiscent to folklore handed down for generations. It invokes the same feeling of timelessness as a fairytale or parable your parents may have told to you as a child. The fact that the film is virtually dialogue-less and relies heavily on imagery and visual metaphor further enforces the folkloric nature of its story.

The art direction of the film also communicates the feeling of mysticism as well as having an eye for the beauty in nature. Since the movie has no dialogue; it communicates every emotional beat through visuals, from subtle facial expressions to gloriously rendered landscape shots to the occasional dream sequence. The style is of the artwork is fairly light on detail, yet vibrant and almost like something you would see in a children's storybook. While Ghibli's creative fingerprints can be felt (namely the focus on nature), majority of the animation was done by the French company Prima Linea Productions, and it's clear by just looking at the film that it was mostly produced in Europe. Regardless of where it was made, the film is a joy on the eyes from beginning to end, particularly the wide shots of the island's beach and forest.

That said, for as well crafted as The Red Turtle's atmosphere is, the film lacks the immediacy to be fully engaging. At times the film can get too wrapped up reveling in the environmental splendor of the island, to the point it feels like it's meandering around what is fairly straightforward core theme. Occasionally shots linger longer than necessary for what is being communicated, and it feels more like padding for runtime rather than deliberate pacing in these instances. On top of that, the story's theme of life's joys and tribulations isn't really breaking new ground, even within the medium of animation. Even the film's dialogue-less approach to storytelling has being done in animated shorts such as Furiko and La Maison en Petits Cubes, though The Red Turtle is significantly longer than either of these examples, which is admirable in its own right.

While The Red Turtle's core theme of the cycle of life might have been retread multiple times before, and engagement might vary for some people (such as myself), it doesn't stop the film from being quite enjoyable. The art and animation is beautifully well handled, and the lack of dialogue makes the film a unique sensory experience. It's a gentle animated folktale which will be best admired on the biggest screen avaliable.