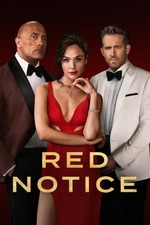 Red Notice is a flawed but fun movie. Based off the trailers and how much money Netflix invested into this film I actually had some hope that it would turn out being a clever, well done action comedy but that didn’t end up happening. It’s an enjoyable high budget romp that serves as the type of device for presenting a handful of Hollywood’s biggest stars which when it comes down to it never gets entirely old but generally as a whole this film ended up being another pretty messy and generic blockbuster. This film had already built a reputation for being Netflix’s most expensive film before it even came out and now after finally seeing it I can say that it certainly feels like an expensive film from start to finish in terms of the international set pieces, visuals, and of course three leading performances but the film simply lacks any true sense of substance or quality in it’s story or characters. In hindsight I probably shouldn’t have expected anything that fresh or too good but despite the delivery of an enjoyable two hours I found myself disappointed with how lacking the flick is in aspects that it would have very much benefited from working on. The film would’ve had a chance of being decent If it could have resisted spitting out pop culture references every seven seconds and put some thought into the arcs of our characters.

The plot is okay it’s an entertaining but incredibly predictable story. The story in a very Indiana Jones-esque way bounces from location to location with only vague reasoning for how the characters are able to travel so easily across the planet and in each new exciting setting a slate of jokes/movement in the narrative is set up. A familiar, consistent sense of enjoyment is practically attached to that type of adventure formula. The heist sub genre usually finds a way to slip in the slightest bit of cleverness in even the dumbest stories and this story, which is clearly dumb, is no exception.

The major twist is one big homage to classic heists twists and while it may have undermined some of (honestly most of) the prior plot points I thought it was pulled off pretty well in the moment too. There is a handful of big flaws with the story the biggest ones being that there’s moments were it feels like it’s trying way too hard to make the audience emotionally connect with the characters, which obviously backfired, and many aspects of the story could have used much more development. The story could have even been better if one or two risks were taken but it played it a too safe for most of the film. The pacing is great since it’s such an enjoyable story there isn’t a lot of slow or boring moments.

The acting is decent Dwayne Johnson and Ryan Reynolds give decent performances. The Rock basically gives the exact performance as the tough, charming, and secretly sentimental hero he’s given for the past few years but it’s still effective so I’m not completely complaining. I’d love it if stepped out of his comfort zone and attempted a dramatic role though. Ryan Reynolds surprisingly gave a pretty mixed performance when it boils down to it because of how over the top he went at times but for the most part I couldn’t help but like his continued cocky, lightweight personality.

Gal Gadot gives a fun performance although I wish she had as much screen time as the other two leads. Ritu Arya and Chris Diamantopoulos give okay supporting performances as well. The direction isn’t that good from Rawson Marshall Thurber, I had some hope the director of Dodgeball would deliver another film deserving of becoming a new personal guilty pleasure of mine but unfortunately his direction felt miss leading and typical. The script frequently falls flat and barely has any redeeming qualities worth mentioning. The cinematography and editing are fine but nothing too special. The action sequences are all fun but lacked stakes or true excitement because of how predictable the outcome for each was.  The comedy is very hit or miss with the ones that miss, missing hard and the ones that worked, working well. The ending is a nice ending that left me pretty pumped for the sequel that’s certainly going to be made sooner than later. Overall Red Notice is a really enjoyable but generically made and substantially lacking action comedy that’s biggest issue has to be that it had the potential to be a good film.