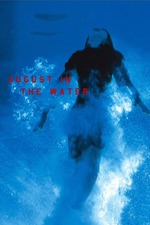 August in the Water

Gorgeous cinematography, a riveting story, and bomb-ass soundtrack (reminds me of Ecco the Dolphin).

The world is a beautiful place. Populated by beautiful scenery, beautiful people, and beautiful soundscapes. August in the Water portrays the world's beauty at it's very best: dreary rainy nights, blisteringly hot summers, the sounds of cicadas chirping throughout the bold greenery of a Japanese forest, the ethereal feeling of hearing the new-age digital ambient score rise as you watch the body of a young girl dive into the dense blue water of her school's swimming pool. The film never takes a break with its visual and auditory presentation. Just when you think the film hit a lull, it slaps you right across the face with more sensory delight. The color palletes chosen for this film are so vibrant and visceral, every single frame is a painting.

This science-fiction-esque laced otherworldy plot works well with a traditional Japanese slice-of-life drama. Ishii's fantastic writing pushes this film to be something full of such spectacular beauty in a world presented as something more lackluster. Finding life in something we deem so lifeless and cold.

This film is transcendental. It's a fever-dream. It's everything I love about cinema. It is art in its purest form.