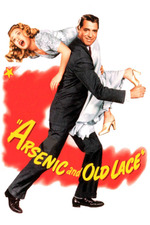 "Insanity runs in my family... It practically gallops." ~ Mortimer Brewster

Broadway hits don't always translate well to the big screen. I'm afraid as I watched Frank Capra's film version of Joseph Kesselring's stage play I kept wishing I was sitting in the old Hudson Theatre in 1943, surrounded by a War-weary audience of New Yorkers laughing their cares away as the Brewster spinsters mercifully murder a dozen lonely men. Today, on DVD, it is more of an amusement than a masterpiece or a side-splitter, but still a good reminder of times when dark situational comedy still aspired to be sophisticated, not just stupid.

To act in front of the camera, Capra was fortunate to get from the Broadway troupe both of the Brewster siblings -- Josephine Hull as Aunt Abby and Jean Adair as Aunt Martha -- along with John Alexander as their delusional nephew Teddy Brewster. Casting also did well tapping Raymond Massey to step into the role created on stage by Boris Karloff as the criminal nephew Jonathan Brewster. Peter Lorre plays his sidekick Dr. Einstein, while Priscilla Lane is the all-but-ignored newlywed Elaine Harper-Brewster. It was fun seeing Edward Everett Horton here, too, as the Happy Dale Sanatorium administrator Mr. Witherspoon.

What did not work for me, unfortunately, was Cary Grant in the lead role as theater critic and journalist Mortimer Brewster. Apparently he was the studio's fourth choice after Ronald Reagan and Jack Benny turned the part down and Bob Hope showed interest but was not available. Screenwriter Julius J. Epstein reportedly complained to Capra that Grant's acting "was going overboard with the comedy," and I totally agree. It's almost embarrassing how disconnected he seems from the rest of the ensemble, making goofy faces, tripping over his own feet, exaggerating every gesture and simply not being funny. In fact, Grant later admitted that his acting here was "horribly over the top" and he would often cite this as his "least favorite" of all his movies.